Here in the Pacific Northwest it hasn't been long since the land changed hands. A lot of sad things happened and are still happening. I used to walk over to the site of the Whitman Mission on Saturday afternoons. Some people brought religion and farming and smallpox there and got killed in 1847 and it started a series of wars. I haven't ventured into any of the area's many reservations other than passing through on the highways, but when I fly over the Yakama reservation and see the trailer homes on the barren hills surrounded by their trash collections I imagine the sadness radiating upward. (Maybe my imagination's way off, though!)

The Absolutely True Diary of a Part-Time Indian is Sherman Alexie's semi-autobiographical novel about leaving the Spokane Indian Reservation, with illustrations by Ellen Forney. Arnold Spirit (“Junior”) is fourteen when he discovers his mother's name in his geometry textbook; the school hasn't acquired new books in the last 30 years. His teacher convinces him he has to leave the reservation to fulfill his potential. Junior transfers to Reardan High in a nearby white farm town, where he and the school's mascot are the only Indians. His tribe (apart from his family) take it as betrayal. When he makes the Reardan basketball team he finds himself up against his former best friend.

“Diary” is poetic, funny, sad, and raunchy. It ought to ring true with anyone who has had to leave home and family to get where they are.

Speaking of cultural displacement, the Pacific Northwest area now has a large Iranian immigrant population, including a bunch of Baha'i.

Persepolis: The Story of a Childhood 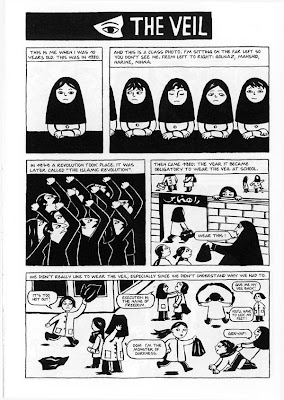 Marjane Satrapi was in grade school in Tehran when the Islamic revolution happened. Suddenly she was forced to wear a veil and attend segregated school. Then things got worse. Her parents eventually shipped her off to France when they realized that she wouldn't be able to have the life they wanted for her.

Once she found her feet in France, Satrapi produced this beautiful black-and-white graphic novel autobiography. She's done several more volumes and an animated film. It's been a while since I read this but I recommend it highly as well if you want to know more about what's happened in Iran.
Posted by James McNeill at 7:30 AM 1 comment:

Turrets make their first playable appearance in today's update to my lunar-lander-on-a-disc game, available on its website.

In addition the rocket has now been outfitted with machineries of aggression: Press right mouse button to fire projectiles out of the rocket's nose, and B to drop a bomb. Bombs start out with the same velocity as the rocket so you can use your ballistic trajectory plot to see where they will go. The nose gun has its own new trajectory plot.

Various other things have been tweaked. The landing gear now uses Chipmunk's damped-spring constraints instead of doing the spring and damping in the step itself. The damping is significantly different between the two approaches; I've tried to tune it back to be similar to before, but with less bounciness. I've also made some semi-successful attempts to tune the landing gear shock movement range to prevent inversion when you hit it sideways, but it's still doable.

The rocket doesn't activate its orientation thrusters when either of its feet are touching the ground unless the main thruster is firing. This makes landings a bit more difficult since you cannot cancel unwanted rotation quite as easily. I might try having the orientation thrusters automatically switch to rotation cancellation once you touch ground if this feels too hard.

I tried and removed missiles that accelerate continuously. They look cool but they make the game really easy, so I'm still thinking about them.

Another change is that there is now a two-planet progression. The first planet has fewer caves and fewer astronauts. The second planet is the classic one.
Posted by James McNeill at 6:36 AM No comments: