I have been too busy keeping the household running this week to get any programming done. 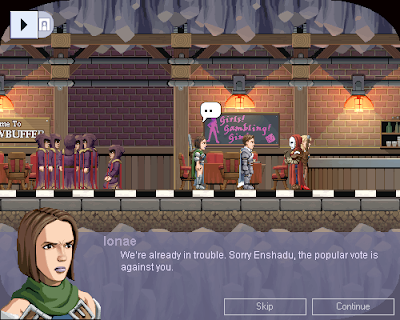 I did manage to play the demo for The Spirit Engine 2, a largely-solo development effort. Mark Pay did the coding, design, and art, with Josh Whelchel composing three hours of music for the game. The game is a side-scrolling role-playing game set in a fairly novel universe (to my eyes, anyway) reminiscent of some of Miyazaki's movies. The production values are excellent. The writing could stand tightening in places but is nonetheless quite readable. Having not played the entire game I can't judge the overarching storylines although there appears to be some fairly heavy foreshadowing. If the mysterious overlords who manage the affairs of men don't turn out to be evil I will be stupefied with astonishment.

My main gripe is that the battle system is not explained in enough detail. It involves building chains of actions for each party member (prior to battle) and then selecting chains of actions dynamically. I don't have a good handle on how to do this, though; the tutorial didn't go into it very well. The interface for building action chains could stand to be improved as well; you can't examine the details of actions while you are assembling chains.

Another problem is that the keyboard interface seems to be an afterthought. I played mostly with the keyboard and it took me a while to figure out that I could open treasure chests, for instance, since they have to be clicked with the mouse. This wasn't explained.

Basically, the game could stand to have more focus-testing on new users to ensure that the ramp-up is smooth. Otherwise, it appears that once you are familiar with the game mechanics it will be a delightful experience.
Posted by James McNeill at 8:19 AM 3 comments:

When I started this blog I had a list of interesting bits of code to share. I've gotten through most of them but have held back polygon triangulation until now. It's my personal symbol of jumping the shark; once I've presented polygon triangulation I've got nothing of importance left to say. It's time to get it out of the way, though, so over the long weekend I found the code and have been dusting it off as well as rereading the sources I used when I wrote it.

The polygon triangulation problem is as follows. We have a polygon outline, which may be concave and may include holes or interior lines. It may also consist of several disjoint polygons. It does not have intersecting lines. For each edge in the outline we know whether each side is inside or outside the polygon. In addition we may have individual vertices inside the polygon which we wish to be incorporated into the triangulation.

The goal is to produce a good triangulation of the polygonal interior without introducing any new vertices. Something like this:

Polygon triangulation turns out to be useful in a lot of different situations once you've got good robust code for doing it. For instance, in last week's post on river generation I used a disc because it's easy to generate uniform random points inside the disc. It would be nice to be able to have a more interesting coastline, though. With triangulation, I can take the coast outline, turn it into a triangle mesh, and then generate a uniform random point by picking a triangle at random (weighted by area) and then a random point within that triangle.

Here are the primary sources I used in writing my triangulator:
Hopefully I'll have finished the code cleanup next week and can get started on the presentation of the triangulation algorithm.
Posted by James McNeill at 6:22 AM 2 comments: